Autumn Statement – What is hitting households the hardest?

Our analysis on ‘Just About Managing’ households was covered in the Guardian on Monday, as their lead story. This article provides a brief recap of the analysis, and focus on the driver’s and what the Government should do about them.

Today the Chancellor will unveil a new budget plan for Britain, taking us from now to the end of this parliament. There have been some trailed announcements of the measures that will be announced in the first official economic statement since the decision to leave the EU, but we won’t know the full story until this afternoon.

Encouragingly, the Government has said there will be no new benefit cuts over the course of this parliament and the Prime Minister has repeatedly expressed her commitment to support a broad group of  ‘just about managing’ families.

Less encouraging is our analysis showing that the cumulative impact of welfare reforms already announced will continue to hit the pockets of low earning households through to 2020.

Low income households in work – those ‘Just About Managing’ – will be the hardest hit and left £2,500 worse off, compared to 2020.

The cumulative impact of welfare cuts will hit low income families both in and out of work on average by £41.45 per week by 2020.

This dramatic drop in households’ income is the results of the combined effects of:

Of the reforms announced in the 2015 Summer Budget aimed at reducing the Welfare bill, the freeze of benefits rate up to 2020 is the measure set to bring the single largest amount of savings to the government. The OBR forecasts a reduction of £3.8bn pounds in welfare expenditure as the result of the freeze. The analysis shows, how, once increase in rent prices and higher costs of livings are accounted for, this reform is likely to have a dramatic impact on the pockets of low income families. 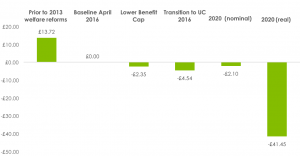 Households in work are the hardest hit

Our analysis models the full roll-out of Universal Credit by 2020. For a large number of households, the new benefit system is less generous than the current tax-credit system. This is due to the cuts to the work allowances (the amount of earnings claimants are allowed to keep before benefits are withdrawn), which is estimated to bring savings to the government for approximatively £3.2bn by 2020.

Following these cuts Universal Credit will on pay less to working families overall than the current tax credits system. On average families in work will lose a staggering £48.90 per week, a higher drop in their income than the average, driven mainly due to cuts to Universal Credit, as well as the rising cost of private rents (low income families in work tend to live in the private rented sector).

Rent prices as driver of poverty

Higher living costs and in particular the increase in private rents are the third main factor driving a reduction in the average incomes of low income households. The analysis modelled increases in private rent prices based on regional trends as reported by the Valuation Office, and a 4% cut in social rents in England over the next four years.

Private renters are the group most heavily impacted, with an average weekly drop in their income of £49.40 pounds. Households living in the social rented sector will face a lower average loss of £31.98.

London boroughs experience the highest average losses. As shown in the chart below, this is largely due to the high rates of rent increases expected in the capital. 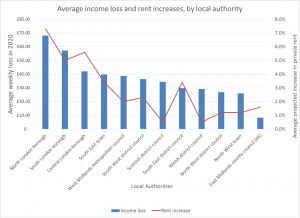 Furthermore, the analysis shows that by 2020, 2.9% of households have income lower than their reported housing costs(!). One in ten of these families are in temporary accommodation already, with the remainder in the private rented sector and likely to end up on council’s homelessness lists. A study commissioned by London Councils estimates the average cost of housing a family in temporary accommodation to the local authority (in addition to Housing Benefit) is £3,510 on average.

Our analysis models rising inflation as projected by the OBR in March 2016 at an average yearly rate of 2.35% up to 2020. The devaluation of the Pound following the Brexit vote however, has led many independent forecasts to project much higher rates of inflation in the years to come, with the Bank of England expecting inflation to rise to 4% in 2017-2018. Analysis from the IFS and Resolution foundation highlights how the effects of Brexit on inflation are likely to hit low income-families further. In particular, households who are not in work would be the hardest hit by an increase in commodities prices, as their income from benefits is frozen for the next four years.

Over half of the families included in this analysis (53%) are not in work due to a disability, or caring responsibility for adults or infant children. The freezing of benefit combined with an increase in living costs will make these families significantly worse off.

As the result of this analysis, Policy in Practice urges the government to consider the following recommendations

The new benefit system was designed to ensure that that work always pays. Following the cuts to work allowances, it’s fair to say that, under UC, work pays less than under the current benefit system. Reversing the cuts to work allowances or lowering the rate at which benefits are withdrawn for each extra pound earn would provide a much needed relief for low income families in work. This measure would undoubtedly increase welfare spending on the short term, but its cheaper and better targeted than raising the personal tax allowance, and introduces incentives for people to move and progress in to work would help families towards greater independence, lowering their reliance on state’s support. Alternative measures within Universal Credit, such as increasing the payment frequency, could also help the lowest income households at relatively little cost.

The housing market is suffering from a shortage of affordable homes in areas where demand is the highest. This means low income private tenants will be the hardest hit by the combination of higher rent prices and a freezing of support received from the government. Increasing the supply of affordable homes by Housing Associations and local authorities is key in managing the demands for housing and driving down price of private rents. There is no easy way to drive down private rents in the short term, but measures to make buy to let less attractive may make housing more affordable for some, and a clampdown on letting agency fees should help private renters too.

A large number of families face high barriers to work preventing them to enter employment, while efforts should focus on helping people to overcome these barriers, and trying to remove them (the 30 hours of free child care policy, and 85% support for childcare under Universal Credit are steps in the right direction). The government should guarantee sustainable support to these households. With the economic uncertainty that the Brexit vote is likely to bring in the year ahead, we cannot afford to have the most vulnerable in society paying the highest price for it.

It has been widely trailed that the chancellor will announce a welcome cut in the withdrawal rate of Universal Credit. Policy in Practice was quoted in the Guardian again yesterday outlining the choices the Chancellor faced if money were to be made available to invest in Universal Credit.

Re-investing in work incentives within Universal Credit is the best way to help ‘Just About Managing’ families.

A 2% cut in withdrawal rates is an investment of around £500m, with more money going to those working additional hours. While it would take around £3bn to make Universal Credit as generous as the tax credit system is today, this is a welcome step in the right direction.

With the Treasury concerned about productivity and low hours employment, I can see why they have invested in a measure that rewards lower earners looking to progress in work.

Working with over 30 local authorities across the country, we’ve helped them with assessing the impact of welfare reforms on their residents.

Our household level approach, combined with our modelling software, allows us to model the cumulative effect of each single policy change announced since 2013 up to 2020.

You can read our original analysis here, or download the press release here.