Local council tax support schemes are a significant part of local welfare support and they are becoming increasingly diverse. According to findings by the Institute for Fiscal Studies (IFS), in 2017-18, council tax support was the most widely available means-tested payment, paid out to 4.9 million households. Council Tax Reduction Support (CTRS) schemes have been evolving rapidly since, becoming localised and discretionary and losing 10% of the funding they had when introduced in 2012/13. As Universal Credit becomes increasingly widespread, councils are examining the impact of their current scheme on local residents and increasingly modelling options that work alongside Universal Credit. Against this backdrop, in this blog post we give a review of council tax support schemes modelled by Policy in Practice for local authority clients in 2019.

Up to 2018, the key driver for scheme change was to fit with ever reducing council budgets. However, the impetus for scheme amendment has now changed. We are seeing more emphasis on the need to improve administration, fairness, and collection rates. Most importantly, schemes are being considered that will work with Universal Credit, either to support its aims, or mitigate anticipated loss under the new Universal Credit system.

The roll-out of Universal Credit has meant that local authorities are increasingly aware that maintaining schemes based on the default scheme results in changes in support for residents. Many local authorities are now examining the impact of Universal Credit on residents to ensure that their council tax support scheme does not have unintended consequences. It is worth noting that Universal Credit is redistributive; 2.0m households will gain increased support under Universal Credit, there are also 2.8m households will receive less support to the tune of an average loss of £52 a week. Certain vulnerable populations, such as people living with disabilities, working lone parents and those who are self-employed are among those who stand to lose the most.

In addition, as Universal Credit rolls out, recipients will be reassessed more often than those on legacy benefits, and a scheme designed to minimise administration to go alongside Universal Credit as well as one that supports those who are adversely affected by benefit changes could create better outcomes for councils and their residents.

Cuts for working-age households: Consequences and changes in CTS Schemes

Since 2013, 90% of English councils have made changes to their local CTS schemes- almost all of them cuts. The average maximum council tax support is currently at 85%, a figure that has decreased by 2.7% over the past year.

As a result of these scheme changes and cuts, working-age households in England are eligible for 24% less support on average. There are now 1.4 million households who have to pay council tax who would not have had to pay prior to the cuts. This also has an impact on collection rates. CAB enquiries increased by 15-20% when minimum payment awards were introduced, and a quarter of this additional council tax liability is not collected- with arrears twice as likely for those moving from zero payment to those increasing payment.

Comparing the outcomes of different types of CTRS schemes

Modelling different potential schemes for councils enables them to better understand the impacts of change to inform decision-making, councillor enquiries and public consultation. Modelling how existing schemes will change under the impact of Universal Credit and comparing them to alternatives is an important step for councils to take to identify vulnerabilities and avoid excessive losses or gains in support.

This year, we have modeled over 150 schemes for almost 50 local authorities.

CTRS scheme types we modelled in 2019 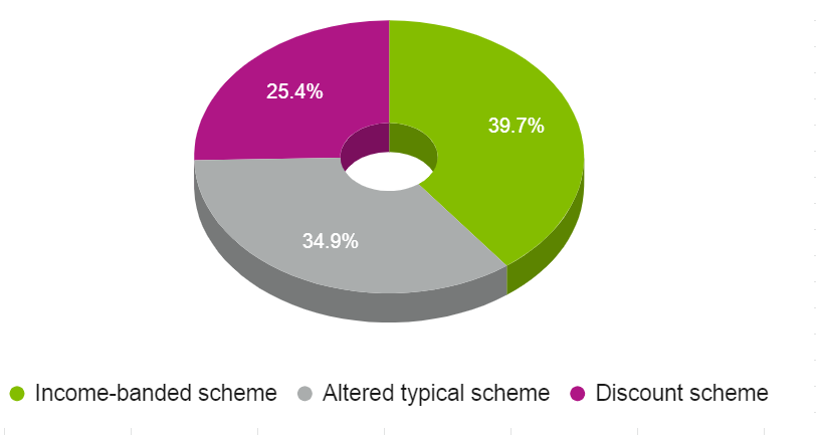 Lessons learned: Key trends over the past year

Our modelling of scheme change for local authorities has revealed some key trends from the past year.

1. Flat rate non-dependent deductions have increased by 30% in the past year

2. There is widespread adoption of vulnerable and protected groups

We are seeing an increase in council objectives to protect vulnerable groups. This is partially in response to the impact of Universal Credit on household income of these groups but also in response to challenges with collection and to meet anti-poverty strategies. These changes will especially assist households that face decreasing benefits under Universal Credit, such as working lone parents and people living with disabilities.

Over this year there has been an expansion in income banded schemes- 28 councils now have adopted these schemes and many more are considering them for implementation in future years. Councils are turning to these simpler schemes because of the impact on administration costs and as a protection against increasing re-assessment of income under Universal Credit.

Under Universal Credit there is increased assessment and administration costs because monthly income fluctuates. Under the default scheme, local authorities expend additional resources and face increased costs when having to constantly reassess Universal Credit recipient’s income. Income banded schemes can be a solution, as most people’s incomes do not vary between bands.

A new trend is the consideration of discount schemes with the first discount scheme to be adopted in 2020/21. These schemes offer even more administrative savings than income-banded schemes.

A case study: A discount scheme and an income banded scheme

The first discount scheme of its kind is due to be adopted by a council next year. In this scheme, discounts on liability are based on household characteristics, rather than income. Like income banded schemes, this model would substantially reduce administration costs and will simplify the scheme both for those administering it and for recipients.

In the last year, we have undertaken a lot of modelling of the different impacts of income-banded schemes and discount schemes as councils consider both options. It is striking how similar the outcomes are for the two scheme types. A discount scheme can better protect households with children as the higher income meets higher costs. 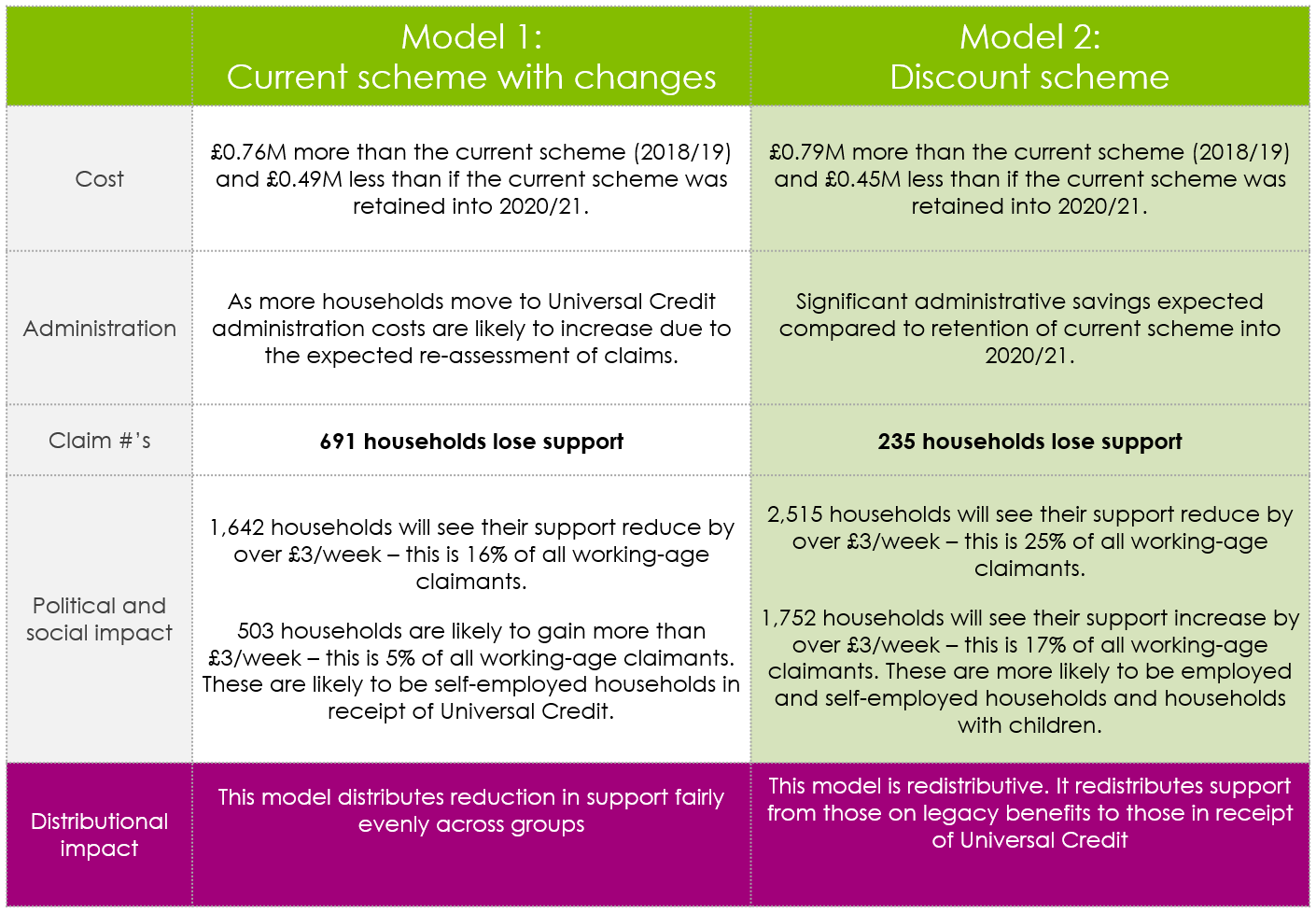 There’s no doubt that Universal Credit is coming and the status quo will not be neutral. Councils choosing how to adapt their schemes will have to make choices that depend on their local demographics, the structure of their existing schemes, the political feasibility of changes and consider their priorities. The effectiveness of existing and potential future schemes can only be understood through detailed modelling and social impact analysis, taking into account the changes that are occurring under Universal Credit.

Listen back to our recent webinar, Lessons learned: our year modelling Council Tax Reduction Schemes, as Zoe Charlesworth and Megan Mclean review the 150+ council tax reduction (CTR) support schemes we modelled for local authority clients in 2019. This recap includes highlights from our analysis, a discussion of trends we’ve identified and consider what this means for local organisations in 2020. View the on-demand webinar here.